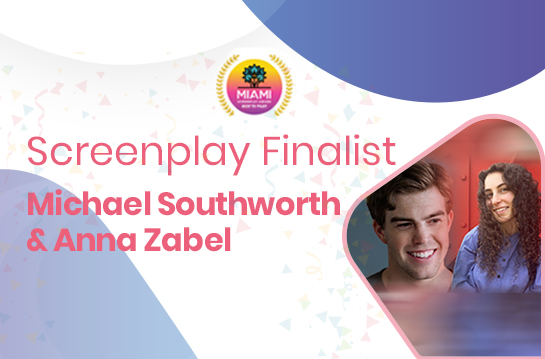 My name is Michael Southworth and I’m from Lexington, Massachusetts.

Logline: A young Marine veteran with nothing to lose decides to rob a trio of banks with his two best friends, but a tenacious cop makes catching him his personal mission, setting up a collision-course cat-and-mouse game that careens in and out of jail. Based on the epic true story of Danny Lee Eckard, “The Desert Fox.”

When LA’s first Covid-19 shutdown effectively put the film industry on hold, I knew I had to take advantage of the downtime and write my second script. My father was born and raised in Arizona, and he tipped me off about an 1960’s outlaw named “The Desert Fox.” He was an ex-marine who had escaped from jail multiple times and survived several weeks in the Sonoran Desert during a widely publicized manhunt. After doing preliminary research, I discovered that he was a fascinating character with mysterious motives. I was also drawn to the setting of 1960’s Arizona – a gritty state with a turbulent racial climate.

I was classically trained in acting at Cornell University and am primarily an actor. However, I was fortunate enough to stumble upon a few screenwriting classes at school and receive mentorship from renowned Professor Austin Bunn (Kill Your Darlings). I quickly fell in love with writing and wrote my first feature during my senior year of college. After moving out to LA, I continued to explore the craft of screenwriting whenever I had gaps of time in my acting career.

I have always been motivated to tell stories that need to be told. I believe the best films are those that change the way one thinks, or change the way one sees the world. So I approach every project with the same mentality – how can I best tell this story, and how can I write or act in a manner that challenges how we think?

Screenwriting is an unforgiving, challenging craft. However, the feeling you get when you truly nail a script is nothing short of euphoria. Some of my biggest challenges have been accepting that rewrites are absolutely essential and believing in my vision. Once I accepted these two principles, I had much more freedom as a writer.

I tend to gravitate towards period pieces and stories that tackle really difficult topics – such as societal alienation, racism and transformation. Thus, I hope my audience members are able to recognize where we came from and how important it is to talk or think about some of our most troubling issues.

I see myself advancing my career as both an actor and a screenwriter. In an ideal world, I would be able to write projects that I can act in myself.

One of my favorite films would have to be Tarantino’s masterpiece Pulp Fiction. In addition to its innovative plot structure, it’s got everything that I try to incorporate into my films – sheer entertainment, growth, and strong messages. A couple other favorites of mine are There Will Be Blood and Inception.

It is without a doubt Star Wars Episode V – The Empire Strikes Back. This movie taught me that the medium of film can truly catapult you into a different world.

While I have many, one of my personal heroes is Matt Damon. Like me, he started out with a lack of connections in the film industry but had a burning passion to act and tell stories. When he encountered road blocks in his acting career, he wrote his own destiny – literally – and penned Good Will Hunting with Ben Affleck. Talk about inspiring. My other personal hero is Michael Jordan for his relentless pursuit of perfecting his craft.

“I have received script coverage from several top screenwriting contests and multiple professionals, and I can honestly say that my Miami Screenplay Awards script analysis blew the others away with its thoroughness and depth. I was astonished by the quality of this competition and am so grateful for the feedback I received.”

Hi! My name is Anna Zabel and I’m from Brooklyn, NY.

My screenplay is called Belly.

The show’s logline is: In this two-timeline story, when Della (at age 26) discovers she’s pregnant and Della (at age 13) gets her period, both older and younger Della must grapple with body image issues, warring best friends, and identity crises, while searching for confidence and artistic fulfillment.

I was inspired to write this show because I felt a dearth of content on TV exploring the intricacies and nuances of eating disorders. My desire is to portray not just a snapshot of life with an eating disorder, but to probe how it manifests over time and in different circumstances. I chose to write a two-timeline story so that I could depict the inception of the eating disorder and its evolution.

My journey has really just begun. I graduated from Princeton University in 2019 with a degree in Comparative Literature and Theater. At school, I pursued playwriting and acting. During the pandemic, I found myself once again turning to TV to provide comfort and inspiration. It was in this time that I first began to study TV writing and immediately fell in love with the medium. Now, I spend as much time as I can developing pilot ideas and refining my writing.

Television has been immensely impactful in my life. Watching my favorite shows, hanging out with my beloved characters, I learned about perspectives outside of my own and saw my own struggles and fears depicted. Because TV has a lasting, intimate relationship with its viewers, in my opinion, it has the potential to affect and move people in a way different from other media. I want to participate in the creation of content that entertains while also being emotionally poignant, responsible, and compassionate.

Because I’ve just begun in this medium, I imagine the biggest challenges are yet to come. But so far, I’ve found it difficult working to create stories in which the act breaks feel justified rather than forced or overly processed. I’m excited to keep working on this aspect of script writing.

I hope that when people watch my shows, they see secret parts of themselves embodied by the characters and feel newly seen and noticed. I hope they feel embraced and challenged.

Five years from now I would love for a show of mine to be in production. That being said, I would also be thrilled to be writing for someone else’s show.

What’s your favorite film of all time? If you can’t single out a film, give us your top 3?

Since I’m more interested in TV writing and TV generally, I would say my three favorite shows are: Buffy The Vampire Slayer, I May Destroy You, and PEN15.

My earliest favorite childhood show is, of course, SpongeBob SquarePants.

I’m also answering this from a TV perspective because the heroes that come to mind are those that I have seen in shows that I love. Cristina Yang from Grey’s Anatomy is one of my heroes. She is unapologetically ambitious and dedicated, yet she’s also a caring, generous friend.

My personal heroes are Shonda Rhimes and Phoebe Waller-Bridge.