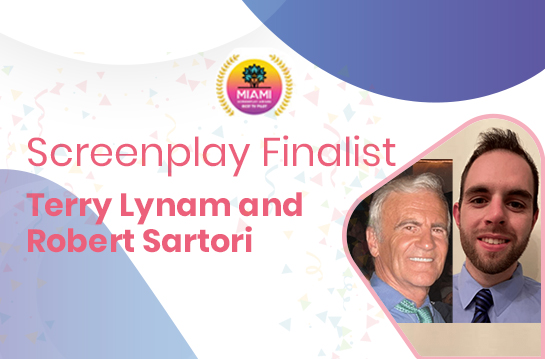 A man who lived a loveless life finds himself in Purgatory with the opportunity at a fresh start in Heaven, only to have it taken away when he gets resuscitated.

The concept of the screenplay derived from my curiosity in “Is there actually is a perfect match for everyone?” This led to me questioning “What if you were the one person on Earth who didn’t have one? And why would that happen?” These critical questions allowed me to think deeper about a character who had a mundane life, and what a fresh start in the most perfect place imaginable would feel like. And most importantly, what it would feel like to have it taken away.

Also, I have always imagined Purgatory as the waiting room of the afterlife. I think that helped me add some of the comedy into it.

The Fresh Start was my first festival submission, but my journey started at New York University where I received a certificate in Television Writing in 2020. This was a short script I wrote for my one of my courses that I modified over time.

I have written other pilots, packets, skits, and short films. My current work can be found at: https://robertsartoriwriting.com/

If I’m able to shape a sentence or a story in a way that resonates with somebody, I can give them a basic blueprint for life. Evoking emotions can help people understand what they want or need, and I find it cool that every story can be up for the reader’s individual interpretation.

With The Fresh Start specifically, the more people I showed it to, the more interpretations there were. It’s motivating that I can craft a story that people can turn into a lesson.

The biggest challenge is maintaining confidence in my ability and continuing to pursue my goal of becoming a screenwriter.  It’s a lifestyle, not a career. So it’s important to remind myself that I’m talented and I’m passionate about doing this for the rest of my life.

When I write something, I want the audience to feel what I intended while leaving a gap for their own interpretation. It gives them a chance to relate the character they just read/watched to their own life, and apply the lesson to their real world

For example, in The Fresh Start, Kevin comes to the realization that there simply weren’t five people in his previous life that would be a match for him in Heaven. That’s why he is overjoyed about his fresh start, and it’s that much more disappointing when it gets taken away. When somebody reads this, I want them to take away that they make sure in this fantastical situation, they would have their five people ready to go and you wouldn’t have to wait on a miracle.

I see myself in a writer’s room, ideally for a television show. My personal favorite is the half-hour comedy format, so being a head writer on a show that follows that is where I see myself.

Dog Day Afternoon. It’s probably not the most famous Al Pacino movie, but to me the characters are ones I feel would be compelling to write. The dialogue is easy, but more importantly it’s gripping. Although the storyline itself is unique, how all the characters speak to each other and their relationships develop makes it one of my favorite movies to watch.

Plus, it’s Al Pacino and John Cazale. Come on.

I’d have to say Pokemon The Movie.  I used to draw new Pokemon that I would make up. One time Pokemon corporate even sent me back a rare card as a “Thanks” for all the new ones I submitted. It was more likely probably them wanting me to stop sending stuff, but I take it as a positive.

Regardless, the movies had a great influence on my creativity as a kid.

It’s tough to choose just one because I feel like as a writer you pull from a little different people, but I feel really inspired by Robin Williams. I remember Good Will Hunting being one of the first dramatic movies I watched, but it still having a touch of comedy. It’s the kind of drama I enjoy the most, where you literally laugh and cry in the same sitting.

Robin Williams was so good at doing both, whether it’s in his stand-up or his acting, that if you can aim for a fraction of what he was able to accomplish then you’d be good to go.

Easy. My mother. For many, many reasons. She is the reason I write, and my personal editor. Whenever I finish any script or story, she’s the first person I want to read it. Her thoughts matter the most to me and if she doesn’t like it, there’s a good chance I’ll just change it all.

Logline:  “Based on a true story.  Two young boys watch their mother’s boyfriend beat her.  But on her deathbed, she says he didn’t do it.  He goes free.  Twenty years later, a rookie prosecutor – a young woman – fights to revive the cold case.”

The concept came from a letter to the editor that grabbed me.  A retired police officer wrote he had always thought the “cops do all the hard work and prosecutors are just around to screw things up.”  But he changed his mind after watching a young woman prosecute a twenty-year-old murder case with great skill, even declining the judge’s offer of a continuance when her father died late in the trial.  She declined because she didn’t want to jeopardize her case with a delay.

History – I wrote my first screenplay in 2003, because a friend of mine is an actor and I had a tale in mind starring him.  The screenplay wasn’t very good but I got hooked on the process.  By now, I’ve written ten features, the last five of which have finished as Semi-Finalist or higher (including nine first places) in over sixty international screenwriting contests.

My motivation comes from my love of the writing process.  I do hope to see a tale (or five) of mine on the big screen some day, but the main reward is in the writing itself.

Biggest challenge so far is getting repped.  I’ve spent all my time on the writing, and twenty minutes trying to get repped, in the hope an agent or manager will come knocking on my door.  It hasn’t happened yet.  Maybe next week.

The main thing I want the readers, or the film audience, to take away is a wet hankie, because the story has moved them.

In five years, I hope to have representation and I’m still writing.  And since the question includes “ideally,” I hope to be thanking the Academy and some of the people who helped along the way.

Favorite cinema hero – Bogart as Charlie in The African Queen.

Personal hero –  The doctors and nurses and other folks with groups like Seeing Eye Expedition and 20/20 who travel to poor nations and perform free cataracts operation that restore sight.  Those volunteers were the inspiration for my recent screenplay Ajeeta the Invincible.