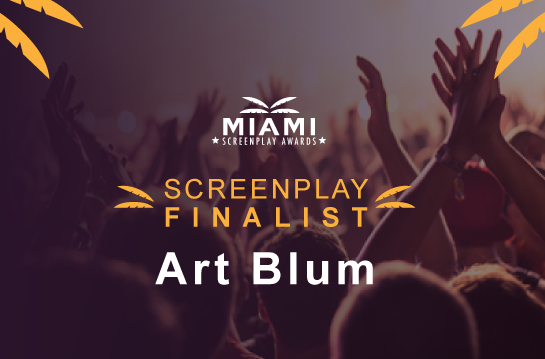 I’m Art Blum. I was born in Chicago, Ill. I live in Los Angeles. Writing is my hobby.

I was working on another script. The hero of my present story was a minor character in that script. While I was developing her character I discovered her story was more compelling than the one I was writing. So I dropped the story I was writing and told her story instead.

I write an outline. I use the Save the Cat beat sheet to help shape my story. When I write my first draft I allow myself room to explore different directions and ideas not in my original outline. So, I don’t rigidly follow the original outline I come up with. I have my first draft read by story consultant(s) and revise. When I think it’s ready I enter a few contests to see how I do. If I do well, it helps my confidence and I send out query letters to producers and companies.

I always loved movies. I became a film editor at a TV station and wanted to grow in this field. So I took classes and in one I wrote a screenplay. It was like figure out a puzzle. I love puzzles so I got hooked on writing.

I like Paddy Chayefsky. Network is one of my favorites. He combines lots of natural humor coming from the characters along with a story that explores the human condition.

Quentin Tarantino. I like his movies. My favorite is “Once Upon a Time in Hollywood.” It’s not his best film. It’s episodic but I like the relationship between the two main characters. Tarantino owns a theater near me and before the movie was released he (for months) played all the old movies that influenced him in the making of this film.

I don’t think I’ve been obsessed but I do remember seeing Bambi as a kid. My aunt took me and I begged her to let me see it again. She didn’t. But I think I liked the coming of age aspect of the story and it still resonates with me.

I have lots of favorite moments, no one earth shattering moment. I recall the moment in the film The Natural when Robert Redford hits the home run at the end. The ball hits the electric sign in the outfield and causes it to blow up. I felt it showed how unlimited human potential could be if you give it a chance to grow.

Atticus Finch. He stood alone against hostile townsfolk and was willing to risk it all to defend a black man accused of a murder.

I’d like to talk to my grandfather. He died when I was five. I’d like to know about the conditions in Russia (where he was from) and how he found the courage to leave and start all over in a strange country, the USA. Also I’d like to let him know I’m grateful he left.