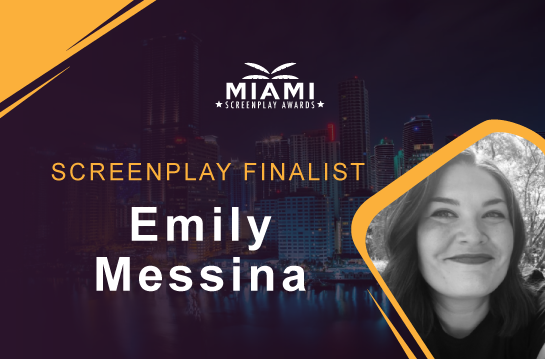 What’s your name? Where were you born? Where do you live? And what’s your
hobby?
Emily Messina
From Carlisle, PA
Live in NYC
Hobbies: writing, watching a lot of TV, yoga, watching YouTube videos of abandoned places.

From concept to finished draft, can you take us through your screenwriting
process?
I spend most of the time writing characters — their backstories, their loves/hate, how
they relate to the other characters, etc. Once those are really fleshed out, everything
else comes a lot easier. I write a macro outline that’s a really zoomed out view of what
happens beginning to end, then zoom in further and further until all the story points
are fully established. After that I write the actual script, which basically writes itself at
that point. Then I obsess over it and rewrite it a million times.
When did you realize that you wanted to become a screenwriter?
High school! I spent a lot of time watching TV (still do).

Who are your biggest filmmaking/screenwriting influences? What about their style
do you like or borrow?
Dan Fogelman, Jenji Kohan, Lena Dunham, Greta Gerwig, Judd Apatow — I love a
really character-driven story that doesn’t necessarily fall into the straight ‘drama’ or
‘comedy’ bucket. I think one of the most powerful things about writing is creating
characters that people can relate to, which those creators do really well.
Have you ever been obsessed with a movie or TV show? If so, which one? Why?
Literally always. I have the capacity to obsess over shows I hate, let alone the ones I
love. I just get invested in people and their stories really easily.

I think the streaming boom of 2010-11ish has been the most significant moment in
television history in my lifetime (so far.) It’s completely changed how people consume
story, and the parameters around television/film have shapeshifted in a really exciting
way.

Who’s your favorite character in cinema history? Why?
Bill from Freaks and Geeks is probably my favorite character of all time. He was one of
the first ‘outsider’ characters I’d seen who didn’t devote all his energy into being
accepted by people who didn’t understand or like him. One of my favorite scenes I’ve
ever seen is when Bill’s playing 7 Minutes in Heaven and he goes into the closet with a
really popular girl who tells him she’s not going to kiss him, so don’t get excited; he
replies with “Did you ever think maybe I don’t want to kiss you?” I thought that was a
really understated but powerful scene.
I also just really love a character who’s happy and fulfilled, plainly put. One we can root
for, genuinely, because they’re rooting for everyone around them. Michael Scott, Leslie
Knope, Phil Dunphy, Charles Boyle, Ted Lasso, Jessica Day.

If you could talk to anyone from any era, who would it be and what would you ask
them?
I’m not a comedian whatsoever but I’ve always been fascinated with SNL and how,
more than any other show, it’s been a consistent representation of the times. It’d be
cool to talk to Lorne Michaels about how that’s changed since the 70s and what the
process has felt like for him.