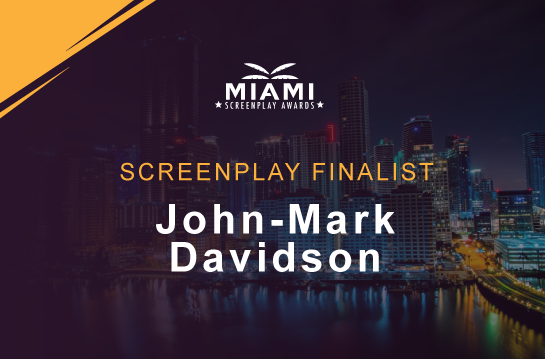 What’s your name? Where were you born? Where do you live? And what’s your
hobby?
My name is John-Mark Davidson. I’m originally from Virginia. I currently live in Austin,
TX, and I enjoy writing.

Where did you come up with the concept that just placed as Finalist in the screenplay
contest? How long did it take you to develop it into the screenplay it is now?

I lived in São Paulo, Brazil, for four years. Before I moved there, I met a Brazilian who
did something similar to this–fly up to the States, buy clothes and jewelry for her friends
and haul it back tariff-free. The rumor was she pocketed ten grand a trip. I thought,
“Well, here’s something.”
I wrote it first as a film, but it didn’t really work. A few years later, I reshaped it into a
pilot. It’s hard to ballpark how long this all took. I picked it up and put it down over the
better part of a decade.

From concept to finished draft, can you take us through your screenwriting process?
There’s a scene, usually a first scene, and I’ll go from there. I’ll write 30, 40 pages until
I’m stuck. Then I stop and begin the outline process. It’s easier for me to outline once I
know the characters. This took me forever to learn.
I then will revisit those first 30, 40 pages, scrap what the outline ruled out and build
from there. If a character reaches a crossroads, turns left and I realize later he should’ve

turned right, I’ll cut and paste the left section into a doc I call the graveyard. I keep all
those scraps because sometimes I realize later that left was the right choice all along.
In that sense, I’m usually working with one main draft, not rewriting draft after draft.
These are the little nuances that may be unique to me, but I doubt there are any real
secrets to uncover. Writing is a total grind. Perseverance.

When did you realize that you wanted to become a screenwriter?
Boogie Nights was probably the start.

Who are your biggest filmmaking/screenwriting influences? What about their style do
you like or borrow?
Some familiar names like Anderson, the Coens, Tarantino, Heckerling, Spike and
Mamet. Sean Durkin’s first two movies are as flawless as any first two I’ve seen. You Can
Count on Me by Kenneth Lonergan is probably my favorite script.
What do I borrow from them? As much as they’re lending.

Have you ever been obsessed with a movie or TV show? If so, which one? Why?
The show Peep Show out of the UK really got me. My wife and I went through the whole
series together. It was special for us because she loves finding a show and working her
way through it, while I almost always tap out after a few episodes. But Peep Show just
felt so fresh to me. It still does.

What’s your favorite moment in cinema history? Why?
I mean, if there’s anything to aspire to in terms of writing, I think of that Godfather
scene where Michael is supposed to kill the cop at the Italian restaurant. It’s set up to be
the turning point of the movie. They have that whole scene beforehand where the family
explains to him exactly what to do: Go to the bathroom, find the pistol, come out, shoot,
leave.

So, by the time they get to the restaurant, the cop and the other guy are talking, but you
can’t even concentrate because you’re just rehearsing in your head what Michael has to
do. You’re looking around at the other families eating dinner.
Finally, he gets up and excuses himself. He finds the gun above the toilet, comes out,
and he…sits back down at the table.
When he sits down, I–as a viewer–stand up. It feels like anything can happen in that
moment. If there’s ever a target worth aiming for in writing, I think it’s creating that
feeling: “I have no idea what’s gonna happen next.”

Who’s your favorite character in cinema history? Why?
Let’s not sleep on Austin Powers. He’s just a ball of joy. Like, “Let’s stop the movie right
here and dance,” kind of thing. It’ll be interesting to see what they do with the new one.

If you could talk to anyone from any era, who would it be and what would you ask
them?
If we’re talking movies, I suppose Chaplin. It’d be really fun to tell him, “Dude, 90 years
later, City Lights stillllllllll kills! How did you do this?” Except I probably wouldn’t call
him dude.