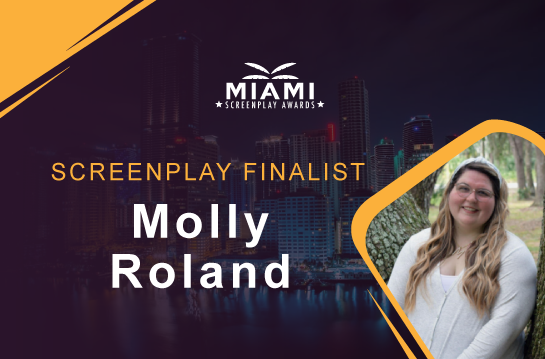 My name is Molly Roland. I was born in in South Florida, in a little community called Parrish. I live now in Atlanta, GA pursuing my dream of film! Which pretty much takes all my time. I always joke that my hobbies include, filmmaking, cinema, and movies.

I’ve been working on For Laughs for the better part of 3 years. It started as a feature film, and what I’ve turned into the screenplay contest is a proof of concept for that feature.

I came up with the concept by living it.

I was shopping with my aunt one time, when she expressed to me that she thought my sister and I wore clothes too tight for us, and that she thought we should “wear clothes that fit. It’s not about the size on the tag. It’s about what fits.” As a fat woman myself, what I’ve come to realize over years of working on self-acceptance is that clothes fit however you want them to—we should dress to express ourselves. Not to express how society wants us to be.

I’m a bad example of having a process. I went straight from idea, to typing out the story. I had a first draft of a short screenplay within days of having the idea. However, I wish I had spent time going through the beats of the story—it may not have taken three years to write that way.

I wrote my first “novel” when I was 11. It was called “Eerie Green”—Think Scooby Doo meets, The X-Files. I received my first parody on that novel when I was also 11, by a classmate who wrote a Scary Movie style version of my novel and shared it out loud with the whole class. I was devasted. I came home to my dad who told me to think of Saturday Night Live— he said, I’d really hit the big time if someone was already making fun of my story. So, I kept writing short stories, poetry, plays—I was too young to know what a screenplay was, but I knew that I was a storyteller.

I like to borrow from the most people that I can. I believe that there are so many talented people to learn from, and so many masterful filmmakers that have brought so much to the medium— film history is one of the most important things we as filmmakers can learn. I think if I had to pick just a few people who I look up to for their writing, quick wit, or style, it would be John Frankenheimer, Rod Sterling, Billy Wilder, and Brian De Palma. I believe these filmmakers tried new things in their films and were always honing their craft.

I’m pretty much obsessed with Sunset Boulevard. I can quote the whole thing at you. I think that it’s so very well written, to the point it’s ahead of its time.

My favorite time in cinema history is “The Long 60’s,” which included the American New Wave. Stuff like, “Midnight Cowboy,” “The Graduate,” “The Honeymoon Killers,” “The Manchurian Candidate.” I believe that filmmaking was innovative at the time, both with the advances in technology that were made (lighter cameras, sync sound), but also the fall of the production code, allowing filmmakers to play with what content they had on screen, making things more controversial.

Oh, the best character in cinema history is when Joaquin Pheonix’s performance of Emperor Commodus in “Gladiator.” I thought that he was such an evil character, but he stole the show movie wise! I love to hate him!

If I could talk to anyone form any era, I would talk to David Lynch. I feel like David Lynch has a similar sentiment of borrowing from film history, and theory and working his knowledge into his creativity. I’d love to pick his brain about his own creative process, and how he conceptualizes a film from start to finish.