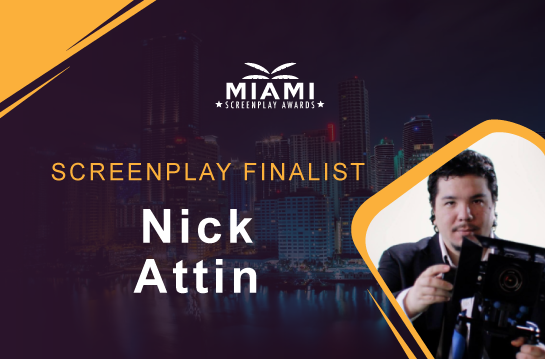 My name is v and I am a Writer, Producer and Director from the twin island republic of Trinidad and Tobago. When I’m not working on a new screenplay or film, I enjoy collecting antique books and vintage memorabilia.

When it came to writing “The Beautiful Cast No Shadows”, I have always enjoyed great Crime Thrillers and I wanted to see where my imagination would take me when I dared to write a Mafia/Gangster story of my own. This was actually the very first material I had ever written back in 2010 and now almost twelve years later and several, several rewrites more… We’re finally here!!!

When an idea for a story pops into my head, I let it stay there for days, maybe weeks on end at a time just to see if it can keep my attention. Then I work on crafting the sexiest 25-30 Word Logline. After that I create a concept poster, (the Producer in me insists on this) and if this looks just as sexy as the Logline then I know I’m on to something! Listening to Music every step of this process plays a critical role for me especially at this point where I prep my writing schedule. After 12 years of practicing this wonderful craft I can write up to 20 Pages per week allowing for downtime on weekends. I don stop until the written sculpture has a general form. Once that’s complete I send it to Screenplay Competitions to receive critical first impression feedback after which I do my detailing and smoothening of all rough edges.

I have always enjoyed being creative and now that I think about it, I’ve wanted to be a Writer/Director since I was very young.

I’m obsessed with “The Sopranos” because never has writing been so consistently incredible that you know and care tremendously about every single character be they major or minor.  Everyone in that show has a voice and their own story to tell. It’s the greatest Series Ever Made!

My favorite moment in cinema history takes place in the Roman Polansky WW2 Drama, “The Pianist”. The scene occurs when famous Polish Piano Player Wladyslaw Szpilman in the midst of overcoming the horrors of war and Nazi occupation, a sympathetic German Captain invites him to play the piano in a virtually destroyed building. At first he’s at pains to play but then once he begins, it’s as if the music is a solemn reflection of all the death and destruction that had taken place right up to that moment. The German Captain was moved to join in that reflection. My God you could see in it his eyes it was so powerful!

My favorite character in cinema history is Tuco Pacifico Benedicto Juan Maria Ramirez from The Good, The Bad and The Ugly. Tuco brought fun and excitement to the story. He’s a survivor and a pragmatist not to mention funny and daring. The scene where he confronts his Priest-Brother about their dead parents showed a greater depth to his character as well!

I would speak with my grandpa George and I would ask him when next are we having a steak dinner with red wine?