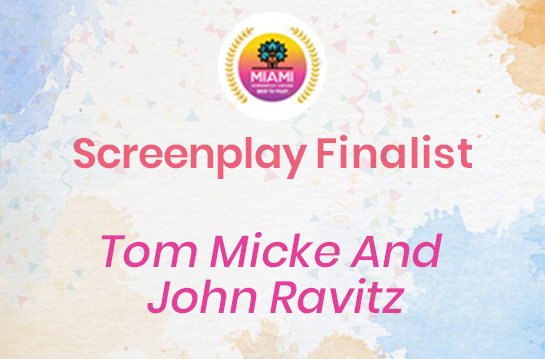 Tom Mickel – California, by way of Washington DC and Phoenix

A surprise incident at the North Pole’s Derby Race throws a shy teenage Elf into a wild adventure. Battling Wolves – Rustlers – Killer Whales, he must first learn to believe in himself in order to survive. Aided by a spirited Elf girl, they race against a ticking clock to save Christmas.

Concept: Story genesis is derived from my Dad placing Hay outside each Christmas Eve

for Santa’s Reindeer – “They need more than apples” – he was a great storyteller… Tell us about your history as a screenwriter. Where did your journey begin?

I was fascinated by screenplays and the incredible journey they take to become films. Writing was a hobby for me until I challenged myself to sit down and write Elf Racer. (now I’m hooked)

This story has been with me for years and I thought the best way to share it was as an animated film for kids from 1 to 92. Completing the Elf Trilogy is the next adventure.

Getting through the maze of having your material read by the right executives.

films or reading your screenplays.

That you can’t give up, you must believe and push forward to reach your goal.

Screening the Elf Trilogy films at the North Pole with Santa and his team.

What’s your favorite film of all time? If you can’t single out a film, give us your top 3. Ratatouille, How to Train Your Dragon, Toy Story, Monsters Inc., Parasite (sorry 5)

Almost anything with Tom Hanks or Meryl Streep

A well financed terrorist organization has trained operatives since they were children; when they finally have a viable candidate to run for president, the current president sets into motion a plan to put his own successor into the Oval Office. I am a former New York State elected official. My 30 years of political experience helped me form many aspects of the story.

The “Wrong Candidate” was the first screenplay that I wrote. I stated writing it three years ago. I have always been a movie and TV Greek. At age 56, I started writing, and I haven’t stopped.

I love the idea of being able to tell a story to an audience that will keep them engaged and invested in the character’s journeys.

Learning to write a screenplay at my age was a challenge. Learning the proper screenplay formatting was key. Also being able to create dialogue that is fresh and unique without being “on the nose” was an important lesson that I continue to focus on.

My hope is that audiences will be engaged in the characters that I have created and that their individual voices stay with them.

In five years, I want to continue writing and hopefully have some of my work in production.

The Godfather, To Kill a Mockingbird and Rocky.

To Sir with Love.

My family, my wife and four children.

My KIDS navigating through the Covid pandemic and almost anyone willing to stand up against oppression and bigotry.