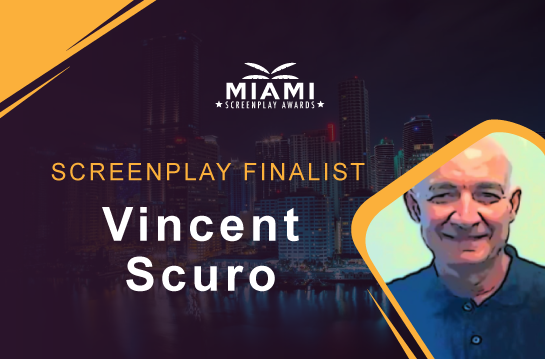 Where were you born?

Where do you live?

And what’s your hobby?

Where did you come up with the concept that just placed as Finalist in the screenplay contest?

RHINE STONE LAND is based on experiences I had when I was working as a musician in a rock band during the 1970s. We were performing at a bar in Secaucus NJ when the manager asked us to publicize the next weekend’s act — a famous former teen idol and movie star (middle-aged at the time) whose career was in decline. This provided the inspiration for the character of Jake Rhinestone, a middle-aged singer so deeply in debt to the Mob and so down on his luck in life that he’ll do anything to get back up. Helping Jake find his way (and vice versa) are two newly-unemployed Madison Avenue advertising executives: Nick, a terribly overconfident Caucasian male and Josie, a neurotically insecure but brilliant African American female — who are composites of people I have worked with in business. Together, they cook up a scheme — fake Jake’s death and cash in on the public’s fascination with dead entertainers. Think greatest hits, T-shirts, comic books, action figures and enough Jake memorabilia to make his fans scream for more! But the jewel in the crown is Rhine Stone Land, an Orlando theme park based on Jake’s life and legacy. The scheme goes awry when Jake meets the grown-up daughter he never knew and his partners are arrested for his murder. Jake must figure out a way to clear their names without giving himself away — and getting whacked by the Mob.

How long did it take you to develop it into the screenplay it is now?

The story has been under development in various forms for over 15 years. Although the fundamental premise hasn’t changed, RHINE STONE LAND got a major overhaul in late 2019, when several of the male characters (including the villain) were changed to females. What I discovered was that the situational humor written for the original men actually was funnier when spoken by women.

When I’m all done, I go back and cut 10-15 pages out of the script (for a feature) without deleting any scenes. If I can do that, I know I have produced the tightest dialog possible.

I think I was about 11 years old when I starting writing spoofs of TV shows and movies to amuse my older brother. Then, in elementary school, one of my teachers noticed that not only could I write coherent sentences but I also could write coherent paragraphs. She recruited me to write for the school newspaper. In later year, I became a sportswriter for my college’s newspaper primarily because I was a varsity baseball player and was at all of the games. That led to writing paid press releases for the publicity department at a book publisher and my first book contract a year later at age 20. After twelve non-fiction books, over 300 newspaper and magazine articles, and five novels, I started writing screenplays because I wanted to do something different.

The first screenplay I ever read was Butch Cassidy and the Sundance Kid by William Goldman. I was 17 at the time and had not seen the movie yet. It’s easy to see why he was awarded the Best Screenplay Oscar. There’s not a wasted word in the entire script. That’s what I strive for when I write.

No, I’ve never been obsessed with a movie or TV show but there are films that I watch over and over again simply because they are so well done and enjoyable.

I have several, but these two come to mind:

In 1974, I went to see the Godfather Part II in the theater with my cousin and when the ship arrived from Italy and the passengers saw the Statue of Liberty for the very first time, we both knew exactly how our Italian immigrant grandparents must have felt when they arrived in America.

In 1977, I went to see Star Wars at a theater in Columbus, OH that had a Dolby Surround Sound system. In the opening scene, when the Imperial ship comes into the shot, it was a “wow” moment because it felt like the ship was flying right over my head.

Indiana Jones. Because he doesn’t realize how good he is at what he does and when things work out well for him, he’s as surprised as we are. It’s kind of like when one of my screenplays wins a festival or contest, or is a Finalist. It surprises the heck out of me.

Assuming you mean someone involved in filmmaking or show business, I would love to have spent an hour or two with the great Carl Reiner just to ask him how I could have made RHINE STONE LAND even funnier.