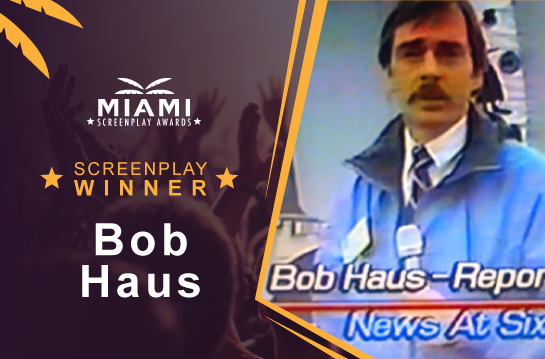 Bob Haus. I was born in Sewickley, Pennsylvania, and live in Oakland, California.  My hobbies are playing bass trombone, tuba, and piano. I’m also an avid bicyclist.

The story was inspired by my time working at a low-budget television station in Victorville, California, in the late 1980’s.  After I became a fan of “Northern Exposure,” I started to toss around ideas regarding a small-town television station. I wrote the first draft of this script in 1997.

I knew I wanted the story to be the classic fish-out-of-water scenario.  And I wanted the main character to be a woman.  At first, I thought she should be a newcomer to the business, fresh out of college.  But then I read a newspaper story about a news director at an LA TV station who not only harassed the female employees, but threatened to blacklist them from the business if they complained.

After writing the first draft, I learned most studios prefer pilots written by writers who have put in their time working as staff writers on existing shows.  I planned to transition from television news to television scriptwriting.  For several reasons, it didn’t happen.

But when I learned about the reboot of “Murphy Brown,” I decided to dust off the script. My attitude was, “Come on, guys, you can come up with SOMETHING new.” I rewrote the script several times, then entered it in film festivals and writing contests. I’ve continued to rewrite and polish it since then.

When I read the Time Magazine article about the making of “All The President’s Men,” I was quite impressed with the challenge of turning the book into a screenplay. Later, I read William Goldman’s “Adventures in the Screen Trade,” and was further inspired.  And I’m sure I’m not the only person who was motivated by Gene Siskel and Roger Ebert’s weekly shows.

Frank Perry’s “David and Lisa” is an enormous influence. Beautifully understated and restrained. Francis Coppola, for both “Patton” and “The Godfather.” Barry Levinson’s “Tin Men” is an underappreciated classic.

When “Hill Street Blues” premiered, I found myself thinking, “This is what we’ve been waiting for!”  I couldn’t understand why the show had such low ratings, and became a one-man PR firm for the show. I told everyone I knew how great it was.  The messy, gritty look of the show seemed, to me, more “real” than anything I’d ever seen.

I have two.  The ending of Chaplin’s “City Lights” is, for me, the greatest ending of any film.  And in “A League of Their Own,” I love the scene in which Helen Haley figures out that Shirley Baker is illiterate. That scene is as close to perfect as you’ll ever get.

Captain Virgil Hilts, as played by Steve McQueen, in “The Great Escape.”  Coolest character of all time.

James Buchanan is widely considered to be the worst American President. Yet he was quite intelligent, and possibly the most well-qualified man ever elected to the office. I’d like to ask him how someone so smart could screw up so badly.  There is also serious disagreement over whether he was our first gay President. I’d like to tell him, “I’ll keep your secret. Gay or straight?”