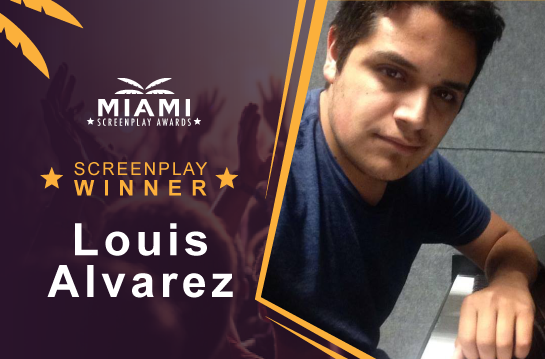 My name is Louis Alvarez. I was born and raised in Reseda, California. I currently live in the city of Tempe, Arizona. My hobby is writing, obviously!

Hmm… that’s an interesting one. The idea just sorta came to me when I wasn’t expecting it. My story originally started out as a film critic who was pressured to review a film that his ex-wife made about their doomed marriage. At the time, I didn’t know the name of the character, or even the turns the story would take. It wasn’t until almost a whole year later that I managed to write the script. I spent one afternoon coming up with an outline, and about a few days, I had a script.

My process is pretty unique. I start with a very broad outline, one that’s not limited to anything that could happen, and then after some time has passed, I have a completed outline. For me, an outline is essentially a script without any dialogue, mainly because I map out everything, and I mean EVERYTHING. My outlines usually end up being in the neighborhood of 15-25 pages long. Once the outline is complete, I move onto the first draft, which I lovingly call “The Frankenstein”, because it’s meant to be long, grotesque, and overall repetitive in some pieces, but you get to understand the story. Then, I do another draft, and then I do another, any maybe another just for extra finality. Like the great Stephen Sondheim once said “Nothing is written so much as it is rewritten” and I often rewrite until I feel my script is at its strongest point.

For me, it started with a simple assignment I was given in my junior year of high school. I had to write an original scene from a book we were reading, and that forced me to create a character building moment through spoken dialogue, and once I read it aloud, my teachers told me they loved it. But it wasn’t really until I saw “Eternal Sunshine of the Spotless Mind” that I declared to myself, as well as the world, that I knew I wanted to become a screenwriter. I never knew you could tell such a beautiful story in such a unique way. After that, I was hooked, and I’ve been on this journey ever since.

My biggest writing influences when it comes to screenwriting are Charlie Kaufman, Quentin Tarantino, and Aaron Sorkin. Charlie is an amazing writer, second to none, and his scripts are always as close to perfect as possible. Through his films, I learned to explore the minds, and wants of a character, and how you can accomplish that with small gestures, or through bits of brilliantly crafted dialogue. Quentin taught me that it’s okay to have fun with a script, and that some of the best moments in a film are when your characters can work off one another and tell us who they are through their stories and their actions. Aaron taught me the importance of dialogue, and how it needs to be balanced in order for your script to work. For Aaron, dialogue is like music, for me, it’s like poetry, and the more balanced it is, the better it reads.

Hmm… that’s another good one. For a while, I was obsessed with Charlie Kaufman and Duke Johnson’s 2015 masterpiece “Anomalisa”, mainly because it’s a beautiful, thought provoking piece that isn’t so easy to understand. On the surface, it seems like a pretty straightforward film, but if you look closely at everything that managed to make its way on screen, you’ll find out just how deep and mysterious the film actually is.

My favorite moment in cinema history is the Gregory Peck’s closing argument as Atticus from “To Kill a Mockingbird”, simply because it’s a masterpiece of a scene. The dialogue is incredible, the cinematography is excellent, and his performance is something to behold. It’s a scene that completely arrests me every time I see it.

Charles Foster Kane is my favorite character in cinema history. He’s one of the most complex, well developed characters ever put to screen. His life was essentially one tragedy after another, with him often being the victim of his own actions. He was an ambitious man who wanted everything, and while he could afford anything this world had to offer, he couldn’t find nor could he buy the happiness he felt as a child.

I would love to talk to Rod Serling. He was always one of my biggest inspirations. When I first started down my journey of wanting to be a screenwriter, I would always think about how Mr. Serling was able to write nearly every episode of the “Twilight Zone” all by himself. If I had the chance to speak with him, I would pick his brain non stop and ask how he was able to pump out so many original stories, as well as how he was able to come up with those stories.