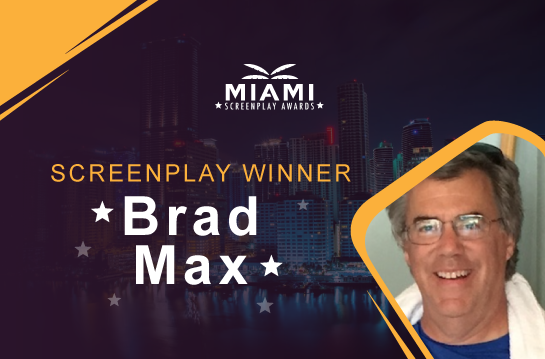 I’m Brad Max, born (67 years ago) in and still live in Kansas City, Missouri.  In addition to writing, I enjoy playing the banjo, camping and fishing, and inline skating.  My first script was set in the world of inline speed skate racing.v

☺ One More Hit, which won the screenplay contest, is an adaptation of a teenage novel written by one of my closest friends and his son.  Totally charmed by the story, I decided I would dash off a script based on the book–give it a month or two, I’d be done.  I had written other scripts, so I should have known better.  Seventeen years later, I’m still re-writing, but still in love with the story.

I’d like to think my process has evolved and will continue to do so, however slowly.  Good or bad, I write from the heart, stories I care about, creating characters I care about, doing things I care about.  I spend a lot of time alone, days camping and re-writing.  I try to keep in mind the principles written about by Robert McKim, Story; David Freeman, Beyond Structure; and Joseph Campbell, The Hero’s Journey, by way of Christopher Vogler, The Hero with a Thousand Faces.

While I was finishing my first script (the skating/love story), a beautiful ending that tied everything up came to me.  I was so touched by what had come into my head that I started bawling right there in the coffee shop.  I had to take my laptop into the bathroom where I hugged it and cried for a while.  That’s when I knew.

Maybe not exactly what you’re asking, but I took a class (twice) on script format from a woman named Esther Luttrell.  Esther had been a script editor in Hollywood and is a screenwriter herself.  Though her class focused on format, Esther gave general advice about writing, including: write from the heart and don’t ever give up.  Also, Steven Soderbergh’s 2000 Oscar acceptance, thanking “anyone who spends part of their day creating.”  And, Julia Cameron, in The Artist’s Way, saying “…our artist is actually our child within, our inner playmate.  As with all playmates, it is joy, not duty that makes for a lasting bond.”

Not sure I’d call it an obsession, but my favorite movie is Babette’s Feast.  The screenplay is based almost verbatim on a story by Isak Disesen (Karen Blixen).  It’s a simple but beautiful story of love, loss, sacrifice, and redemption.

Near the end of Babette’s Feast, when a decorated general returns after decades to a tiny village to visit the love (mutually unrequited) of his life and says to her, “I have been with you every day of my life…And, I shall be with you every day that is left to me.  Every evening I shall sit down, if not in the flesh, which means nothing, in spirit, which is all, to dine with you, just like tonight.  For tonight I have learned, dear sister, that in this world anything is possible.”  Why?  I like it because of the message of hope it conveys.

In Babette’s Feast (ok, maybe it’s an obsession), Babette Hersant (played by the late Stephane Audran), who appears as a humble housekeeper, but is fact…much more (no spoiler).  Near the end of the story she says, “Poor?  No, I shall never be poor.  I told you that I am a great artist.  A great artist, Mesdames, is never poor.  We have something, Mesdames, of which other people know nothing.”

My dad, who we lost in early 2019.  He sat with me when I was in fifth grade and taught me about writing.  I would ask him about his experience with the creative part of writing, where he thought for him the creativity came from, what was his process, who influenced him.